Why Boerenkool or Curly Kale Seeds ?.. 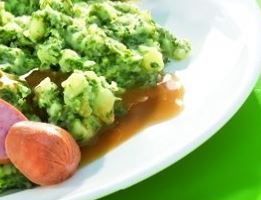 Eaten for over 2000 years kale is making a comeback as one of the most trendiest and healthiest foods.

As one of the brassicas ‘curly kale’ is very popular due to it’s health benefits – packed full of vitamins, minerals and anti-oxidants it is full of healthy benefits (for example it contains more vitamin c than an orange !!)

In addition Boerenkool – Curly Kale is used to help people detox, fight against cancer and recommended as part of a healthy diet by nutritionists.

What is boernekook – curly kale?

As one of the ‘brassicas’ (such as broccoli, cabbage, cauliflower, etc.) it is one of the most ‘traditional’ foods.

But if you want to grow something differently (and make some really unusual winter meals) it is very easy to grow, will look great on your allotment or vegetable garden and maybe unusually you will actually want it to freeze !!

We especially like the F1 reflex curly kale seeds because you can use it in the summer in a salad using the tasty ‘baby’ leaves and in the winter as part of the boerenkool dish. (Available from suttons )

How to grow boerenkool – curly cale

Most brassicas (like kale) require good quality soil – try to add compost in the winter months to get the best possible yealds.

But the advantage of curly kale (like F1 reflex) is that it’s a ‘less demanding’ crop and you can get away with poorer soil.

You can either pre-sow under glass in March or sow them outside from April. They tolerate both full sun and semi-shade and will germinate in about 10 days

Like all seeds they are very popular to birds you will need to protect them until they reach about 30 cm high.

Curly Kale is worth showing off !!

How to how to prepare curly kale (boerenkool)

The most popular method is to cook a very filling ‘hearty’ meal fit for a working farmer (hence the name boer = farmer in the title !)

However (because of it’s health benefits) more and more people are simply using it steamed or blanched’.  For example using at as an ingredient with stir fried with herbs, combined with sauteed potatoes or as part of a salad.

How to prepare boerenkool / curly kale

Where to buy curly kale seeds

Hi, I'm Minze and I love growing fruit & veg as well as cooking. Which is why I started the Chef's Gardener website. Read More

I am currently developing my own range of products.

In the mean time I am also an Amazon Associate which means that some of the links on this site are affiliate links.

This means if you click on the link, visit Amazon and purchase the item, I will earn some money at no extra cost to you.